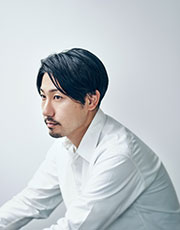 Mikiya Kobayashi, born in Tokyo, in 1981, established his own studio in 2006.
Since his beginnings, Mikiya Kobayashi's creation process was focused on the perception of its designs, looking for uniqueness in minimal shapes. Thanks to his inclination for natural resources, wood has become one of the main material used for his projects over the years. Kobayashi has been always closely related to his cultural heritage, connecting the tradition with new concepts, manufacturing processes and technologies. His process, always close to materials, and his challenging approach have led the studio to work within a large variety of projects, from industrial design products to furniture and interior. Running together a design studio and showroom/store, he has been able to get direct feedback from customers about the products, which helped him to keep on improving his design. Mikiya Kobayashi was born in 1981, and graduated at Musashino Art University, Tokyo in 2004. In 2005 he worked for FIELD FOUR DESIGN OFFICE, one of the biggest interior design firm in Japan. In 2006 he founded his studio in Tokyo and began designing for wood products companies such as H CONCEPT and DREAMY PERSON, where he started his own design brand KIME. Later, he worked on several product designs for LEMNOS and Timbre. In 2008, he collaborated with KARIMOKU FURNITURE, wood furniture company active for over 70 years in Japan, designing a furniture collection named HARU. Since then, he started directing his own brands for the japanese largest furniture companies including FUJI FURNITURE, TAKUMI KOHGEI and TENDO MOKKO. He also worked on furniture projects for MASTERWAL. In 2010, he received international design awards such as the "IF Gold award" and the "Red dot design award". In 2011, he opened his shop "TAIYOU no SHITA" in Tokyo, offering his own designs together with a curated selection of furniture and products. In 2016 he launched TAIYOU&C. a furniture brand for contract and home use, where he invited international designers to collaborate on the collection. More recent projects included the design of a shoehorn collection for LEMNOS, a radio/speaker for LEXON (France), a bistrot chair for MAISON DRUCKER (France), a fabric collection for AQUACLEAN (Spain) and a stool for DIABLA (Spain), a GANDIABLASCO new brand. In 2018 he opened his second studio in Valencia, to better connect with the increasing number of european clients, and established the lifestyle brand IMPLEMENTS, with the desire to deliver products that enrich people's lives.